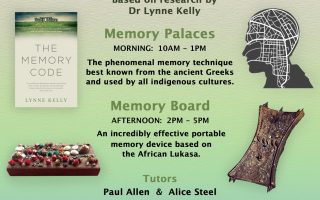 There is a one day workshop on Saturday April 7th. There are also mnemonic arts classes for school students. All takes places at the new Orality Centre offices. For more information, click on the images and you will head off to The Orality Centre website. Director Paul Allen and fellow staff member Alice Steel will be the tutors. Would we reduce the impact of failing memory, and maybe even of dementia, by formally keeping people in contact with their personal memory devices – song, dance, story, art and landscape?

The many questions I receive about my research on memory tend to fall into three categories:

* How can I memorise better?
* What are the implications for education?
* And is there anything we can do about loss of memory with ageing?

The research focus for us at The Orality Centre will initially concentrate on these three questions.

Reader John Seed wrote a fascinating comment on the post titled Starting a contemporary songline. I have answered some of the post there, but wanted to reply to part of it as a post of its own. John wrote:

I’m fascinated by your book and the possibility that it might help my own fading memory. Do you find that your overall memory has improved alongside your ability to remember those particular things – countries, plants,  for which you’ve built a songline/palace? My memory has been atrocious for years but this doesn’t prevent me from memorising long poems and the like. …

Speaking of workshops, are your workshops about building memory palaces? If so, I’d dearly like to attend one.

I am in my mid 60s. My overall memory has improved massively since I have been using the memory methods – not just the things I am consciously memorising. I am not sure of the reason, though. I suspect it is a combination of factors. I am more confident about my memory but I also set up hooks constantly and make links. I look for them now. Anything I want to remember, I make a funny or wild or quirky link. The more I have been doing this, the more a habit it has become.

As for the workshops, the answer is ‘yes’. I am involved in developing a whole range of workshops through The Orality Centre (TOC) to be starting very soon. Of course the main one will be about memory palaces, but we will also soon be running a workshop on making Personal Winter Counts. The idea is to create a memory device, tried and tested by Native American cultures, which will offer hooks for every year of your life. By maintaining the stories and links throughout life, the hope and belief is that this will provide a permanent memory device to help keep memories alive in old age. There are more details about Winter Counts and the planned workshop below.

What would happen if we embed our stories in memory palaces around our homes, and link them to music and dance and mnemonic objects, right through life? These are the memory systems used by our ancestors for thousands of years. If we use them deliberately throughout life, might this delay the onset of dementia? Or at least reduce the impact? Might living in our memory palaces keep those memories alive?

I have asked members of various indigenous cultures and the reply seems to indicate that by performing the rituals, the repeating of stories and linking to the memory devices, singing the songs and performing the dances, the impact of dementia is reduced. But these are only anecdotes asked in casual conversation. Enticing though it is, that is not evidence. We will be exploring recent research, making contact with experts in the field while following the experiences of those who participate in the workshops.

There have been quite a few reports recently which indicate that the brain retains its links to music and place when other intellectual capacities are failing. This is a few of them.

Alive Inside is a documentary about the non-profit project Music and Memory made by film maker Michael Rossato-Bennett. This is a sample one of the patients working with the  late Dr Oliver Sacks. https://www.youtube.com/watch?v=QG7X-cy9iqA. The Music and Memory website is here: https://musicandmemory.org.

What if the songs they connected to were more than tunes and tales of love? What if they were songs recording critical information? What of that connection was also reflected in physical memory palaces? Would that make the ‘reconnection with life’ that the Music and Memory people talk about even more effective?

The Plains Indians of North America use memory devices referred to as Winter Counts. Named because the start of the year is taken from the first snow fall of the year, the animal hides or other fabrics are adorned with a new image each year representing the most signficant event of the year. Other events from that year are then linked to the key event and the stories recalled regularly to ensure the history is not forgotten. Lone Dog recorded his calendar on buffalo hide for the Dakota Nation, each pictograph signifying an outstanding event from 1800 through 1871. The Wajaje Winter Count provides the early history of the southern Teton Lakota tribes. Beginning with the center glyph, it documents the years 1758- 1759 through 1885-1886. I have used a TOC-WinterCount to record the years from 1900 until 2013 (I must update it!) with one major event for each year.

At the TOC-WinterCount workshops, TOC staff intend to talk about the memory methods of the Plains Indians and make personal TOC-WinterCounts with attendees, each symbol representing a year of our lives.  An image of the key event will be there for each year on a piece of canvas which is easily rolled and stored. The stories linked to that event, to that year, should be retold and recalled regularly over life just as the Lakota and Dakota did for their community.

Please contact me if this workshop appeals. Although we will run it initially in Victoria, Australia, we may well work virtually across the country and even around the world.

I am absolutely delighted to announce the formation of the Orality Centre which will be based in Etty Street, Castlemaine, on the site which was previously the senior campus for Castlemaine Secondary College (CSC) before the whole school was combined in their new buildings.

Judith McLean will be Deputy Principal of CSC in 2017. More commonly known as Rex, she has 10 years experience teaching in remote Aboriginal communities and will take a leading role in the Orality Centre. Rex comes from a secondary mathematics and  science teaching background but has a wealth of experience learned from the Elders she worked with.

Paul Allen is an artist and art teacher who has secured an Arts Victoria Grant for me to work as and artist-in-residence implementing the ideas from The Memory Code at Malmesbury Primary School, only 25 kilometres away. He will also have a leading role at the Orality Centre.

I could not ask for two more impressive teachers to establish this project. There has been and overwhelmingly enthusiastic response to my research from educators from early childhood right through university and continuing education for adults.

The concepts we have talked about in the rather excited meetings to date have centred on ideas like how we can use art, music, vivid characters, storytelling, songlines and an array of mnemonic devices to enhance the regular curriculum: Mathematics, Science, Humanities, Languages and bringing Art and Music right into the middle. We have no intention of adding new subject, just making learning in the existing classes even better.

There has been a great deal of interest from people working with with indigenous students and students with dyslexia, ADHD and higher academic ability among many themes. There’s also been interest from those who feel that these traditional memory technologies may have significant implications in improving memory retention in the elderly.

I have had so many requests for workshops about all these topics, that I am absolutely thrilled that now we have the staff and home to establish the Orality Centre. I am really looking forward to working with the educators, artists and musicians who have already spoken to me about getting involved.

Thank you to Rex and Paul for making this happen!