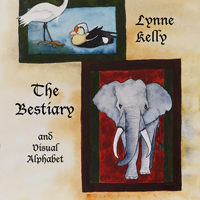 The Bestiary and Visual Alphabet is finally ready for purchase in printed or e-book format. All information in The Memory Whisperer Shop. It includes 73 original art works in high resolution and instructions of how to use for memorising names, lists, speeches and anything which uses words.

This book offers two totally new memory devices based on medieval memory techniques. The Visual Alphabet is the starting point, a sequence of animals and human characters. It is used to make information memorable by adding vivid images to whatever you are trying to remember. The sequence is perfect for memorising speeches, lists or anything where the order is important.

The much more extensive Bestiary is used for memorising anything which uses words, especially people’s names. The Visual Alphabet gives a starting point for the first letter of a name, but the Bestiary offers the first two letters, so is a much more effective memory prompt. By imagining the beast interacting with the person as you chat, you will create an image which will point you to the name whenever you need it.

Presented with dubious quality poetry to look medieval, The Bestiary and Visual Alphabet is a practical memory tool for every day use.

Instructions from the book:

This memory aid starts with a medieval idea, the Visual Alphabet. This sequence of creatures gives a sequence of pegs with which to associate your information. You will always get them in order.

The spider goddess Arachne throws her web over the Bird who is being attacked by the Cat being burnt by the Dragon who is also burning the Eagle who is just about to eat the Frog resting on the horn of a Goat being attacked by a Hydra. The Hydra is attacking an Imp who is attempting to kick the hat off a Jester who is attacking a Kitten just about to be eaten by a Lion. On the tail of the Lion hangs a little Marmoset who is secretly being watched by a Neanderthal linked by vine to an Owl who is being stalked by a Panther. The tail of said Panther and Quetzalcoatl are tangled as the feathered serpent attacks a Rat sitting on a Skull being bitten by a Toucan sitting on the tail of a Unicorn. Escaping all this mayhem, the Unicorn has a Vulture resting on its horn. He is eyeing off the Wombat who is being attacked by Xena the warrior woman standing on the horns of a Yak just about to be zapped by Zeus.

This list can be used to memorise anything with a sequence such as a speech, list of winners or even your shopping. It can also be used to memorise people’s names. Just note the letter that starts their name and associate that creature with the person in front of you. You may need to make further links to get the rest of the name if you don’t think the single letter will be enough.

As lots of names start with Ma or Ja or St, for example, you will do far better to associate the beast with the first two letters of the name using The Bestiary, based on the mediaeval books designed to memorise virtues and vices. You don’t need to remember the whole 264 at a single go. Just add in those you need gradually. Meanwhile, if you don’t know the relevant beast, use the Visual Alphabet.

As my artwork may well be insufficient for you to identify the beast I have added poetry, of sorts, to include its name. There were many letter combinations for which I could not find any beast and so became creative (or desperate).

The purpose of my Bestiary, fortunately, is not to be a great work of art nor of poetry. It is merely to be memorable and fun.