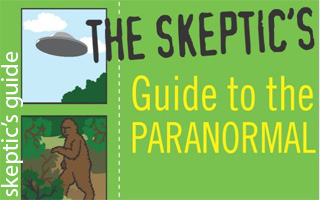 “Some believers accuse skeptics of having nothing left but a dull, cold, scientific world. I am only left with art, music, literature, theatre, the magnificence of nature, mathematics, the human spirit, sex, the cosmos, friendship, history, science, imagination, dreams, oceans, mountains, love and the wonder of birth. That’ll do me.”
(From the Introduction.)

The Skeptic’s Guide to the Paranormal describes some of the best known pseudo-scientific claims and the rational explanations which can be offered to explain what is weird and wonderful. The real world is awesome – witness the birth of a child and nothing will surpass it. People can be awesome – read the best literature, study the best art, listen to the most glorious music and you will have no doubts. Science is awesome – from the atoms to the universe via the human brain, there is so much we still don’t know. We don’t need pseudoscience to embellish reality. The Skeptic’s Guide to the Paranormal is from a personal perspective, just telling it the way I see it. It is available through all bookshops, including Amazon.

Details of the divination system I created to do ‘psychic’ readings can be found here: Cold reading with Tauromancy.

‘We find ourselves in a society which erroneously believes it has undergone an Enlightenment, but has only experienced a certain degree of Brightening. Lynne Kelly’s informative book should never have been needed, but obviously is. Telling people what they already know – that there is no Tooth Fairy, magic is a subject for children’s story books and immortality, ESP and astral projection belong in fantasy stories – is made a more acceptable and communicable message via this book. Kudos and applause to the author. Let’s have more … James Randi, President, James Randi Educational Foundation

‘Lynne Kelly’s Skeptic’s Guide to the Paranormal is a lovely book. It covers a wide range of paranormal “mythconceptions” in an entertaining and comprehensive way. The fascinating topics include the Bermuda Triangle, UFOs, Astrology, Nostradamus and Spoon Bending. The Universe around us is magnificent enough to fill us with awe and wonder – and this book shows us that we don’t have to rely on second-rate re-hashed myths.’ Karl Kruszelnicki, Julius Sumner Miller Fellow, University of Sydney

Need an answer for New Age or UFO bores? Then this book is for you. Lynne Kelly presents a diverse collection of the popular paranormal – and its rational, DIY explanations. Thus psychic readings are just perceptive psychology, if not outright chicanery, and anyone who can hold a twig can dowse. She does both, DIY-style and successfully. Funniest moment: convincingly interpreting  Coleridge’s Kubla Khan in the style of Nostradamus. A thoroughly sensible book that should be promoted as widely as possible. Lucy Sussex, The Sunday Age, June 6, 2004

After a new party trick? Read this book and you’ll learn how to bend spoons like Uri Geller. The author explains a range of paranormal phenomena, providing rational and scientific explanations to many mysteries – the Bermuda Triangle, the Loch Ness Monster, Big Foot, ghosts and even spontaneous combustion! * * * *  New Idea, June 19, 2004

Many people would like to believe in psychic abilities that can provide an element of wonder and comfort in a difficult world. Lynne Kelly is one of them, but has discovered trickery and delusion instead of enlightenment. Sunday Herald, Sun, June 6, 2004

Buy this book. … Lynne Kelly has been teaching science and maths for over 30 years but there are few overt traces of pedagogy in The Skeptic’s Guide. Rather she carefully lays out the claims and explanations made for variously commonly held beliefs then leads the reader gently towards consideration of other explanations. … This is a book no skeptic can afford to be without. It will give you the wherewithal to answer all those questions which constantly crop up at dinner parties, meetings of the knitting circle or football club, and in terms that require no deep understanding of quantum physics or abnormal psychology.” Barry Williams, the Skeptic, Winter, 2004.

For all those who have ever wanted to get to the bottom of mysteries such as these, and for those who have refused to believe but haven’t had the means to disprove the myths, The Skeptics Guide to the Paranormal is a boon. Through case studies and detailed explanation, Lynne Kelly explores the scientfic explanations for more than twenty areas of common paranormal belief. Ms Kelly does not scoff or ridicule genuine believers – rather she explores in matter of fact language what is commonly believed, the various theories that have been put forward to explain the phenomenon and, finally, the scientific explanation. What is obvious in every chapter is that Ms Kelly has not jumped to any conclusions, but has instead kept an open mind and approached the issues scientifically. From firewalking, to spoon bending, ghostly apparitions and Yetis, she explores all the avaiable evidence in detail. This is enlightening reading, but it is also very entertaining. Readers will be fascinated by the various beliefs, the evidence and case studies, as well as by the explanations of the various phemonena. An outstanding read.  Aussie Reviews. Review by Sally Murphy

I liked that not only were the people who believed in such things as psychics not stupid and gullible, but it was possible that some of the psychics themselves genuinely believed in their powers. … Plus, there was all the science which was uber-interesting, plus: Suspenseful-much. So… I’d say, a 5 out of 5. This isn’t just, Oh, I know Lynne and have to be nice to her about her book score. I actually, really enjoyed it. It explained things which have puzzled me for years, and thus was goodly. Cam Smith, Virtual School student