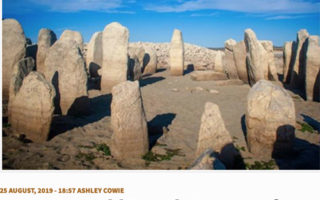 There are so many sites nicknamed with the tag “Stonehenge” that I have not had time to explore them all. When the “Spanish Stonehenge” hit the news in recent weeks, I was pointed to the reports by many readers of The Memory Code. They could all see so many of the signs that this site was used as a memory palace, a restricted knowledge site.

Many pointed me to the article linked to the image above, 5,000-Year-Old Temple Emerges from Underwater in Spain by Ashley Cowie in Ancient Origins.

People see the same properties as Stonehenge in monuments well separated in space and time because there is one single common factor and that is the way the human brain memorizes information.

The Spanish Stonehenge is more likely a dolmen than an open circle – that is a covered, restricted space. I explain in The Memory Code why restricted spaces are essential for elders to retain accurate information over long time spans. That is why all non-literate cultures have them. Labelling a site as a “temple” leads to assumptions that the space had a single religious purpose, and often that its primary purpose was for burial. Indigenous cultures do not separate the spiritual from the mundane. It is Eurocentric thinking which limits interpreting the purpose of monuments to religious and the ubiquitous ‘ritual’ purposes.

Cultures without writing are dependent on memory to store all their knowledge. Without exception, every indigenous culture I studied right around the world used a similar range of memory techniques. These have evolved everywhere because they match the way the human brain stores information, as described in Memory Craft. We are all working with the same brain structure.

Memory palaces are the most effective mnemonic technology known and used in some form by non-literate cultures across the world. In a memory palace, information is associated with each location in sequence. The engravings within the dolmen, on each of the megaliths, would create a perfect memory palace.

Dolmens are assumed to be burial places. Although burial may be one purpose, all non-literate cultures use restricted performance spaces for initiated elders to ensure knowledge is preserved accurately, especially pan-generational knowledge of survival strategies in time of severe resource stress. The few remains, if any, found in most dolmens, would indicate a location for an elite, such as the knowledge elders. Knowledge and power correlated in oral cultures.

Restricting the songs and stories which encode information avoids corruption of data caused by the so-called Chinese whispers effect. A combination of public and restricted performance spaces is implied here by the open and restricted spaces. This combination is found in oral cultures around the world.

Placement of ceremonial structures near rivers is also a constant all over the world. Large gatherings need water and food, trade routes, while rivers are critical landscape features. Vivid stories, as represented in mythology, are a fundamental method for making abstract and mundane information memorable. Without a continuous culture linked to the monument, there is no justification for interpreting the engraving as a serpent, as a protector.

The idea that such monuments are “thought to have been temples of sun worship” because of astronomical alignments is also demeaning to indigenous cultures. The term ‘worship’ implies that non-literate cultures live in a fog of superstition. They simply would not have survived if that was the case. All the cultures I researched, and talked with, were hugely pragmatic and used the movement of the sun to create a calendar to ensure optimum use of resources and maintain their ceremonial cycle. That is not to deny a spiritual aspect, but to deny an exclusively sacred purpose. Ceremonies are an imperative to ensure practical and cultural information is performed regularly so that it is retained and conveyed.

The idea reported that the elongated wavy engraving on the megalith at the entrance corresponds to the passage of the Tagus River is a very exciting development. A map of the river is exactly what would be expected. We have ample evidence from Australia, where we have a continuous oral culture dating back about 60 000 years, that art was often used as a memory aid to maps. The same can be found in cultures from Africa, the Americas and the Pacific.

One of those who wrote to me was Alyssa McMurtry, who also wrote Drought Has Revealed Spain’s Long-Submerged ‘Stonehenge’: Up close with the 7,000-year-old Dolmen of Guadalperal for Atlas Obscura.

Alyssa interviewed Angel Castano, the local historian. She told me:

From what he had previously learned about the menhir at the entrance, there was a snake carved into it that was assumed to be a serpent guarding treasures. Since that was a dominant theory, that’s what he was telling the media when the dolmen first emerged from the water. But after seeing the actual stone and consulting with the original drawings made by German archeologists who discovered it in the 20s, he figured he’d have to close an eye, spin around and use a whole lot of imagination to see a snake in the carving. However, in looking at what was supposed to be the snake, his intuition told him that it may be the Tajo River. He rushed to find an old map of the area before the river had been flooded, and just last night he realized that the squiggly line, once considered a snake, corresponds virtually “100%” with the course of the river. Below is an image he sent me using an old map and the original archeologists drawing of the menhir! I told him your theory and he liked it a lot. Although still unproven, I think his idea of it being a map, not an unjustified protector as you say, goes to show that when approaching indigenous artifacts from the lense of “how was this actually practical, how did it help them survive?” you can come up with a lot more compelling (and interesting) answers than assuming it’s all kooky religious nonsense!