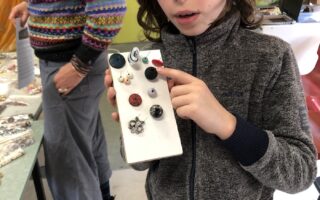 I am still bowled over by what a skilled teacher with really amazing students can do with the ideas in Memory Craft. The Year 3/4 teacher at Candlebark school, Nat, had heard about my work from her husband, Paul, who had heard an interview about The Memory Code. She invited me to give a workshop at the school – I had no idea how overwhelming it would be. Photos by Nat and Damian Kelly – all with permission of the parents and school.

Nat had already introduced the students to aspects of my work and they really understood how association and memory works. After talking briefly about Indigenous cultures and memory systems, with particular emphasis on Australian First Nations cultures, we made memory boards – each student creating a memory device for a topic they had chosen to investigate in detail. We modelled these on the African lukasa of the Luba people. I recycle beads from the MAAW (Mount Alexander Animal Welfare) Op Shop (Charity Shop) taking all the broken jewellery that they would normally have to discard. Students pin these to boards to represent their chosen topic.

The care students took chasing the right bead for each item in their sequence of information was wonderful to watch. That time is invaluable – it fixes the association between the bead and the knowledge. One white bead with red in the middle represented a heart while a black and white one was a panda. The panda-encoding students was particularly pleased with his choice from a variety of black and white options. The heart-shaped bead was perfect, he explained, because he loves pandas.

A week later, I did the same workshop with first year Cultural Astronomy students at the University of Melbourne under the guidance of Associate Professor Duane Hamacher. There was the same enthusiasm, the same careful selection of beads, the same ability to explain why a particular bead was chosen. The only difference was the complexity of the data encoded – the university students encoded 88 constellations and the meanings of the names. Back to Candlebark…

Having pinned the beads to the boards, often rearranging them a few times, students then used glue guns to fix them permanently.

Damian appeared at the end of the session and was soon surrounded by enthusiastic kids wanting to explain their lukasas (technically, the plural is nkasa) to him.

But the excitement of the lukasa workshop was just the start! Katy, a maths specialist teacher, had taken my Rapscali Tables concept and run wild with it. Students had pre-tested on tables and then illustrated the ones they didn’t know – making them instantly memorable.

7 x 3 = 21. Heaven x tree = plenty sun. The student’s personal character, her rapscallion, is now in a story she has created which starts with the rapscallion in heaven, then with a tree and ending with plenty of sun. Here I am being told the story.

4 x 8 = 32. The story has to take the rapscallion from the door to a gate and end up with a dirty shoe. For some students, it is the story they really embellish.

And some students are incredibly artistic and embellish with art. I was astounded by these examples.

But I was unprepared for the most amazing part of all. I had seen students making lukasa before. I had seen Rapscali tables at work. But I had never experienced students performing a songline through the bush and ending up at a woodhenge.

A few weeks later, the students led a group of parents, siblings, Principal John Marsden, and others up to the bush above the classrooms. They started by telling us – through performance – about how incredibly long Aboriginal people had been in Australia and how we were following their knowledge system based on sacred locations along a sung knowledge trail. We stopped along the trail to hear about 12 different civilisations in chronological order – ancient Egyptians and Babylonians, Romans and Greeks (arguing who pinched what and who was the greatest) – to the present day. There was terrific creativity and humour in the performances, but the basis was solid knowledge – and these students now have grounded this sequence in hooks on which to hang so much more learning.

Arriving at the henge, painstakingly built by Nat, Paul and year 3/4 parents, students took to the 12 posts representing the civilisations.

This was surprising. I had always assumed – without realising the assumption – that the ancient knowledge keepers would have progressed around the henge posts or stones much as I do around a memory palace. It hadn’t occurred to me that there may be experts on each topic, ‘owning’ each post or stone and the knowledge it represented. Is there any way the archaeology could ever tell us if this is the case?

Various performances told us more about the civilisations and what we have learnt from them to inform contemporary life. And they performed their multiplication tables, also linked to their woodhenge! Finally, we were reminded that Australia’s First Nations people had been there long before all of the other cultures and are still here as dynamic cultures today.

Other classes at the school will use the Woodhenge and the trail through the bush for different topics in the future.

Thank you so much Nat, for being such an incredible teacher and John Marsden, for creating a school like Candlebark which allows students to learn with so much creativity.